23 Unconventional Things To Do On Australia’s East Coast

The East Coast of Australia is HUGE! To put it into perspective, it would take you around 50 hours of non stop driving to cruise along the coast between Melbourne and Cairns. Due to it’s vastness, it can be difficult at times to choose where to go and what to see. The Whitsundays, Fraser Island, the Great Ocean Road and Byron Bay live up to their popularity for a reason. However, the size of the East Coast is a true resemblance of the thousands (no kidding – thousands) of amazing beaches, national parks and rainforests that are just as worthy of a visit. As true patriots to the stunning scenery of this country, we have put together a few recommendations (it was hard to narrow it down to just 23) of some of our favourite unconventional things to do on Australia’s East Coast. After all, to travel is to explore.

Although Australia’s public bus system makes it very easy and affordable to travel the east coast, nothing beats the freedom of cruising along the never ending Aussie roads at your own pace. Greyhound and Premier stop in all major tourist destinations, however a Campervan allows you to venture that little further off the beaten track. Not only can you plan your trip as you go and make that last minute and impulsive “do we turn left or right?” decision, but hiring a Campervan takes the stress off having to organise accommodation in advance. Most Australian campervan companies including bedding, camping and camping facilities, do be aware that ‘freedom camping‘ is not always allowed.

There’s no party like a backpacker bar party (we know this all too well… shit gets loose)! But if you can spare a few hours away from the mayhem, Melbourne’s inner city is home to some of the coolest laneway bars in the world. Some of them are hard to find with secret doors hidden down some of Melbourne’s graffiti lined streets. You really need to have the local tips to get there (that’s where we come in). Some of our favourites: Fall from Grace is a bar hidden behind a bookshelf in a restaurant called State of Grace. Some of our other favourites are Rooftop Bar, Sister Bellas, The Croft Institute and Madame Brussels – dress well! If you are venturing to Chapel Street, check out Jungle Boy – it is hidden out the back of a restaurant called Boston Sub.

One of our favourite places to explore in Victoria. Located around 2 hours south of Melbourne, Wilson’s Promontory is the most southern part of mainland Australia. Here you can expect to have an entire pristine beach all to yourself! Australian animals such as Wombats, Kangaroos and Wallabies stroll around the 32km national park freely and there are walking trails spanning from 30 minutes to overnight – depending on what kind of adventure you are after! Not easily accessible by public transport, you are best to rent a car or campervan or book a tour. Our top spots: Mt Oberon Walk and Squeaky Beach.

Believe it or not, the coastline between Melbourne and Sydney is home to some epic surf beaches! The road spanning along 90 Mile Beach (there’s actually 94 miles of surf beach), will lead you beyond the typical backpacker trail and through the friendly towns of East Gippsland – a great way to meet Aussies! Some of our favourite places to visit are Woodside Beach, Seaspray and of course, Lake’s Entrance. Note: some beaches along this route are not patrolled and the surf can be rough – be safe!

Venturing north into New South Wales and 150km inland from the coast, you will stumble open Australia’s highest mountain. The Snowy Mountains form a part of the Australian Alps that see more snow per year than the Swiss Alps!

It sounds boring. But why visit Australia and not pay a visit to the capital? Melbourne and Sydney were fighting to be named the country’s capital, so in true Aussie style, they decided to plant the capital smack bang in the middle of the two cities – Canberra was born! Free guided tours of Australia’s Parliament House take place at 10am, 1pm and 3pm.

Byron Bay’s Main Beach is the bomb – there’s no doubt about that! But if you do have your own car or campervan the outer beaches are well worth the visit (especially if you’re looking for a good local surf spot). Some of our favourites are Belongil Beach, Wategos Beach and White’s Beach. 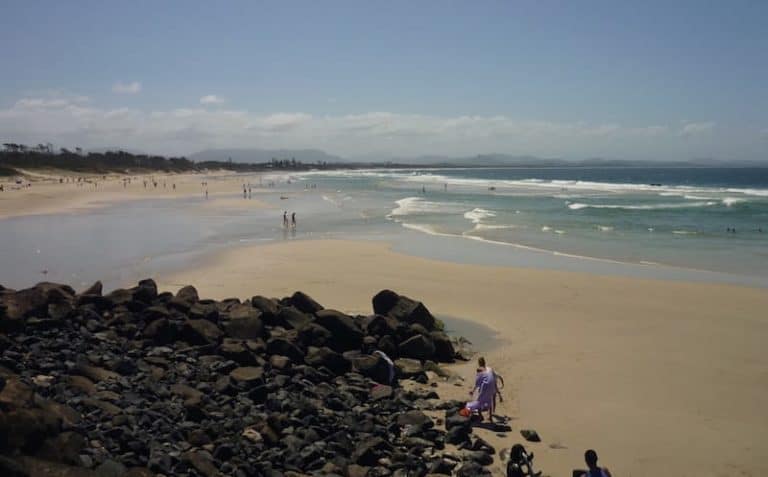 Like most major cities in the world, exploring the suburbs is the best way to really get a taste for life in the big smoke. Sydney’s train network makes it easy to explore beyond the city centre. Central Station connects to all of Sydney’s train lines. Some of our favourite places to grab a beer, a good brunch, check out the street art and the local shops or catch some live music are Glebe, Newtown, King’s Cross (that’s an obvious one), Paddington and Surry Hills.

Leaving Sydney and heading north along the New South Wales coast, there are so many stunning surf beaches to stop by, including Newcastle, Port Macquarie and one of our favourites – Yamba. But three hours south of Byron Bay near a place called Woolgoolga sits Spot X Surf Camp. This is becoming more and more popular, but if you’ve got the time, it’s a great place to learn to surf (or hire a board for the pros). The surf camp sits upon the beach with hammocks, bean bags, nightly bonfires and is the ultimate place to chill out.

If you’re on a tight budget and not too much of a fan of Steve Irwin, Lone Pine Koala Sanctuary is one of our top picks for getting up close and personal with Australia’s furry animals! Situated just a short drive from Brisbane, there are shuttles to and from the sanctuary available. Double up your day out with a hike to the top of Mt Cootha!

Australia looks good from the sky! Chances are that you have already booked your Skydive – good on you! But Hang Gliding is a completely different experience to skydiving and surprisingly affordable (under $150). Byron Bay is one of our favourite places to give it a go. Imagine standing at the top of a mountain and on the count of 3, running as fast as you can until your feet can no longer feel the ground! Flying over Cape Byron like a bird… why not?

If you are travelling the east coast by bus, we recommend renting a car or campervan from Brisbane for a few days to explore the surrounding Rainforests and National Park (or even throw in a little visit to Nimbin)! Many of the national parks in the Gold Coast Hinterland are UNESCO World Heritage Listed and are a sublime spot for rock jumping, waterfalls, walking tracks or simply chilling in the natural swimming holes.

We believe that this is one of the most awe inspiring natural occurrences to experience on the east coast. Each year from November to mid March, you can visit Mon Repos Beach in the Bundaberg Region to witness the nesting and hatching of marine turtles. Viewings are best at night time and will cost you only $14.60. From November to January, prepare to see the huge turtles emerging from the ocean to find a safe spot to nest their eggs. From January onwards, you are likely to see the tiny little hatchlings come to life! And of course while in Bundaberg you should definitely do a Bundaberg Rum tour!

When we think of the east coast, we immediately think of beaches and paradise. Queensland however is one of Australia’s largest cattle and agricultural destinations. Queensland’s Outback is where you can get a taste of “real” Australia! As you arrive in to Rockhampton, expect to be welcomed by a giant cow! If you are planning on spending a night – venture the coastal side of town of Emu Park for the night – after trying a Steak in one of the city’s pubs of course! 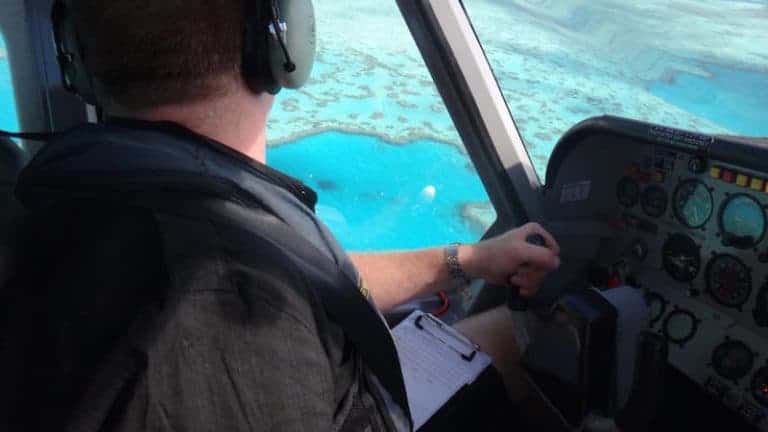 Overnight sailing trips are so much fun and give you the chance to explore the islands. But if you are looking to do something a little bit different, why not head out on a Jet Ski Tour? Experiences start from around $99 per person (twin share).

This is for the scuba divers. SS Yongala is a shipwreck located off the coast of Ayr – north of Airlie Beach. The ship sank over 100 years ago and 122 people were killed. The experience itself is both eerie and exhilarating and the reef surrounding the ship is also a great place to spot Manta Rays, Turtles and an abundance of other marine life.

Surprisingly, a lot of backpackers do not know about this little island treat. Magnetic Island has become an ever popular destination on the backpacker trail (probably because of the island’s epic parties). But in the winter months, make your way to the Butterfly Forest in Horseshoe Bay and prepare to be surrounded by an influx of frantically, flying butterflies.

One of the only three places in the world with Everglades, Noosa is home to a beautiful river system flowing through National Park and Beaches. Hiring a kayak is cheap and the flat, calm waters make for an easy paddle. If heading out on your lonesome is not your thing, Discovery Group offer a number of affordable tours… the half day Sunset Cruise is one of our favourite things to do in Noosa and at the right time of the year you may even catch some Dolphins! With 8,022 islands in Australia, it is hard to choose just a few to get to! However Fitzroy Island is one of the cheapest islands to visit for the day (about $69 from Cairns) and is a great place to beat the crowds, hit the walking tracks, check out the turtle hospital, paddleboard, kayak, snorkel and BYO your own alcohol!

Did you know that Cairns is home to world’s tallest natural pyramid? The walk to the top will take you a few good hours but the views are worth it! You will need a car to get here (just a short drive from Cairns) and you will be treated to a 360 degree view of the Cairns region.

Cairns locals flock to the Atherton Tablelands during summer to escape the heat (as they are located 600m above sea level). Some popular sights in the tablelands include Millaa Millaa Falls (where Peter Andre filmed Mysterious Girl) and Curtain Fig Tree. However a great place for a day out is Lake Tinaroo – a huge lake that is great for swimming, pier jumping, picnics and platypus spotting. Uncle Brians offer tours to the tablelands and Cairns is also a GREAT place to hire a campervan for a few days to explore (don’t forget to check out Cape Tribulation, Kuranda and Port Douglas as well).

Nomads have hostels along the East Coast – why not get yourself a BedHopper Pass? Bed Hopper passes allow you to save money by bulk buying your accommodation, so won’t make such a dent in your budget compared to a regular hostel booking!
Share this article
Write for us

23 Unconventional Things To Do On Australia’s East Coast