Listening in on other people’s conversations is the best way to get yourself an honest opinion, or giving them a few drinks! It’s through these means that I began to understand a little bit of a healthy rivalry between Auckland City and Wellington City. When I delved a little bit more it became apparent that this Wellington Vs Auckland debate results in some pretty passionate feelings and opinions.

What better way to channel such extreme passion than to exploit it to my advantage to discuss which city will take the crown as New Zealands best city. Wellington or Auckland. Auckland is the biggest city, Wellington is the Capital city, so if you could only visit one of them, which would you choose?

In order to understand the big picture we must remind ourselves of a little New Zealand history. Auckland was originally the capital of New Zealand but Wellington replaced it in 1865 suggesting a possible inferiority complex on Auckland’s part. Nobody likes to be demoted. Perhaps this is why Auckland strives to remain in close competition with the capital city to the present day.

On paper, these cities are ridiculously similar in what they can offer.

In both of these cities there’s pretty much something for everyone, so which one has the edge over the other? (Ratings are current Tripadvisor ratings of each attraction – where applicable)

Auckland War Memorial Museum is an impressive building located within the Domain. It’s well worth trying to visit at night for one of their regular events, they often light up the building too. However it’s a 30 minute walk or 10 minute bus ride to get here and it’ll cost international visitors $25 to get in.

Museum of New Zealand Te Papa Tongarewa (Te Papa) is probably one of the best museums in the World. It’s the National Museum of New Zealand and it’s easy to spend the whole day here and still not see everything. If you’re staying at Nomads Wellington just take a walk down the road to get here. Te Papa is fairly centrally located wherever you are in town and it’s FREE to enter.(A gold coin donation is welcomed).

I’m going to declare Wellington as the winner here purely because of how easy it is to get to and that it’s free to get in. 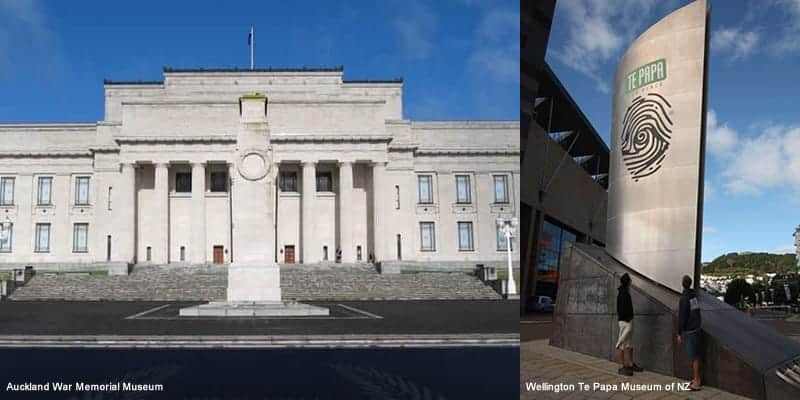 The Auckland Botanical Gardens is a stunning place with over 10,000 plants from around the world. There are lots of different gardens to explore and a nice cafe and visitor centre on site. It only opened in 1982 so the garden is very young. The gardens are 25km out of the city, which is a bit of a mission to get to if you don’t have a car. You can get a bus or train but it’s still a 20 minute walk along Hill Road to get there. Entry is FREE.

Wellington Botanical Gardens. There are several different gardens to explore within the site including a Peace Garden, Rose Garden and Begonia House. During the day you’ll have great views over Wellington City and if you visit at night you might even see glow worms in the Main Garden on a guided glow worm tour. It’s a 20 minute walk or 10 minute cable car ride to get here and entry is FREE.

Again Wellington reigns, but this time just because of the distance from the CBD. Auckland Zoo has over 1000 animals from rhinos, giraffes, elephants, red pandas, lions and tigers to native and exotic birds and the obligatory reptiles. Not forgetting the ever popular meerkat. Auckland Zoo is well set out with plenty of places to sit and eat and enjoy the location. It takes around 30 minutes by bus to get here. Entry will cost you around $28. (Auckland Zoo is a not for profit so all entrance fees go back into caring for the animals and towards conservation.)

Wellington Zoo also has an impressive collection of animals including cheetahs, chimpanzees, lions, penguins, baboons and reptiles. You can book a close encounter with a variety of animals and even have a sleepover at the zoo. It takes about 25 minutes by bus from the central city to get to the zoo. Entry is $24 for adults. (Wellington Zoo is a charitable trust and the world’s first carboNZero certified zoo.)

Auckland also has Kelly Tarlton’s Sealife Aquarium, located on the way to Mission Bay. A place to see all kinds of aquatic animals including sharks and penguins in the Antarctic Ice Adventure area. Entry from $39.

Wellington has the beautiful Zealandia, an eco-sanctuary housing some of the world’s rarest wildlife. This is a stunning place to visit for nature lovers because all of the wildlife is actually living wild within this protected area. Entry from $19.50 but do consider forking out a little extra for a tour with an expert guide.

It’s hard for me to declare who wins this one. Although tripadvisor ratings would suggest that Wellington wins, Auckland’s wildlife attractions really are good. However I think Wellington is the marginal winner, because Zealandia really is a unique experience. 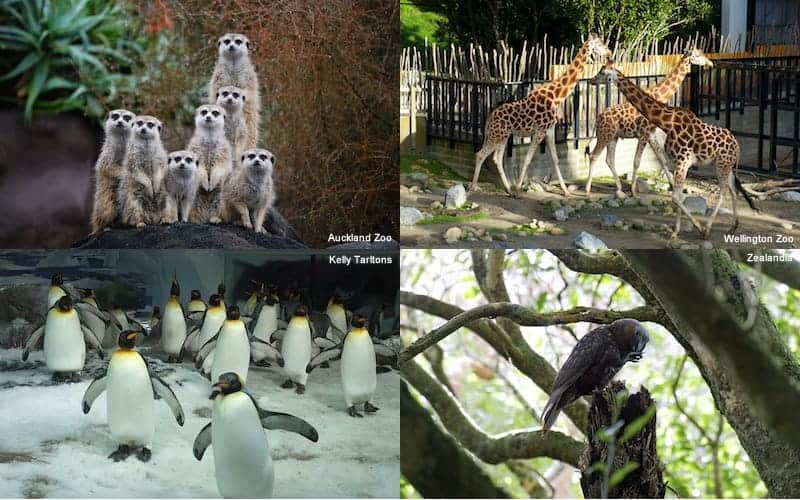 In Auckland you can

In Wellington you can

If you’re looking for adventure activities, Auckland is your clear go to destination out of the two!

I never really associate beaches with cities however both Auckland and Wellington have really lovely beaches nearby.

Mission Bay in Auckland is probably one of the most popular to visit because Mission Bay is a lovely little beachside suburb which it’s possible to walk to from Auckland CBD. It’s easier to take the bus, but on a nice day the walk is well worth it. Or head a bit further up the road to St Heliers which is less busy. There are plenty of other beaches around Auckland, some small and not very busy, some nudist beaches even and some that are quite a distance away, like Piha Beach, which is worth hiring a car and visiting on a day trip.

Oriental Bay is Wellingtons most accessible beach, just a few minutes walk from the city centre. Further afield you should visit Lyall Bay, Scorching Bay or the historic Island Bay which is a very popular dive site because of a sunken frigate and loads of marine life.

For me Auckland is number one this time because of the walk to Mission Bay and the views of Rangitoto Island from the beach. I asked around for some input in to whether Wellington or Auckland should reign supreme and the comments were both surprising and insightful.

“Auckland is a thriving, young, and culturally diverse town. Combine that with every possible destination you actually want to visit at your fingertips and you have paradise!”

“People come and think “I MUST GET OUT” but in fact there is heaps to do and it’s a lot cheaper and better to do it in Auckland.”

It has to be said, as a base Auckland is possibly second to none. Spectacular Islands, the Hauraki Gulf, remote black sand beaches and rainforest all within an hour of the city centre. And in the city itself, bungy jumping, the skytower, great shopping and nightlife!

“The Te Papa Museum in Wellington does not bore you to death. It’s modern and exhibits exhibitions that people are interested in, there is even an outdoor garden and wildlife centre.”

“Wellingtonians are the most laid back compared to other cities. There’s a good mix of business people in suits as well as funky artsy people doing all sorts of creative things.”

At the end of this discussion I’m none the wiser as to which city should claim to be New Zealands best city. For me personally I prefer Auckland, but then I live here and I find that Wellingtons nickname “Windy Welly” is a bit too on point. Essentially it totally depends on what you’re looking for and what you want to do. If you’re looking for adventure activities then you should head to Auckland. If you’re looking for culture then Wellington has the edge. If you want a bit of everything then either city would do!

What I am certain of however is that if you have the time, then you should try to visit both cities, because although they have many similar attractions, the cities are very different!

Why not check out both cities for yourself and then please let us know what your opinion is, who should win, Auckland or Wellington?

From the Author: Cheska would like to thank her fellow colleagues from Auckland and Wellington, for their passionate contributions to the article!

9 thoughts on “Wellington Vs Auckland”