What is Anzac Day? Well firstly ANZAC stands for Australian and New Zealand Army Corps. Anzac Day commemorates the Australians and New Zealanders “who served and died in all wars, conflicts, and peacekeeping operations” and “the contribution and suffering of all those who have served.”

Originally Anzac Day was a day of remembrance for those that fought at Gallipoli during World War 1. It has since become a day to remember the soldiers, families and volunteers who have served their country (Australia / New Zealand) during any conflict.

In Australia many people congregate at RSL clubs – Returned and Services League, Australia (RSL) on Anzac Day. One strange thing (when you don’t know the history of why) is Anzac Day is the only day of the year in most states where you can play the gambling game ‘Two Up‘. Two Up is a traditional Australian gambling game played by ANZAC soldiers.

Australians are big fans of sport (of any type). In Australian Football (AFL) “The Anzac Medal is awarded to the player in the match who best exemplifies the Anzac spirit – skill, courage, self-sacrifice, teamwork and fair play”

In Rugby League Football there is the Anzac Test. Obviously commemorating Anzac troops, the Anzac Test is normally held a week before Anzac Day. 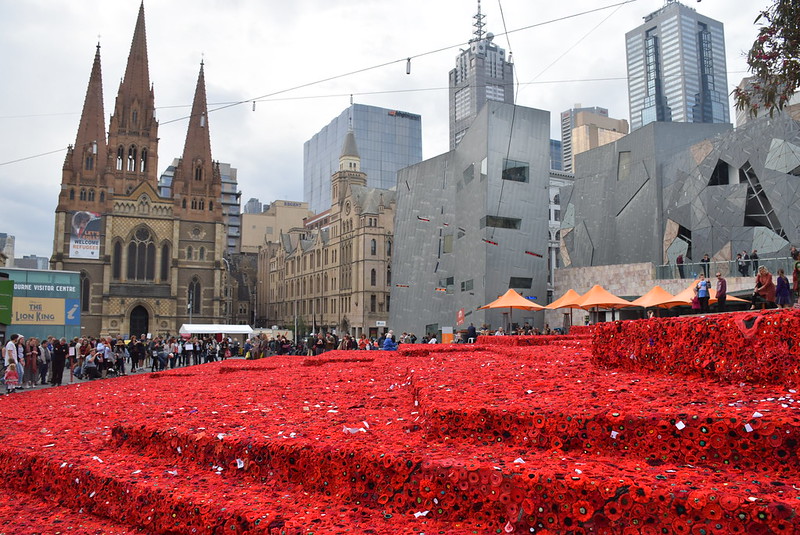 You’ll see lots of paper poppies on and around Anzac Day in NZ. These poppies are a symbol of remembrance which are handed out by members of the Returned Services Association.

In New Zealand, shops are prohibited from opening until 1pm on the 25th April.

Although Australians and New Zealanders get a day off work, this is not a day for celebration. It’s a very solemn day with dawn services being held in various locations around both countries.

Image – “Anzac Day 1” by Mike Subritzky – I Mike Subritzky created this work entirely by myself. Transferred from en.wikipedia. Licensed under Public Domain via Wikimedia Commons.