The Eureka Tower was completed in June 2006 and is a 300-metre (984 ft) skyscraper located in the Southbank precinct of Melbourne. When the Tower was completed it was the tallest residential tower in the world, but as these things always go, that World Record was quickly taken by another tall building.

The observation deck of the tower (Eureka Skydeck 88) occupies the entire 88th floor and is the highest public viewing platform in a building in the Southern Hemisphere. Because Eureka Skydeck occupies a whole floor you get full 360 degree views of all of Melbourne, an incredible view during the day and maybe even more impressive at night.

If looking out over Melbourne from up high just doesn’t seem “extreme enough” then luckily for you in addition to the observation deck, Eureka Skydeck 88 also has “The Terrace” and “The Edge”. 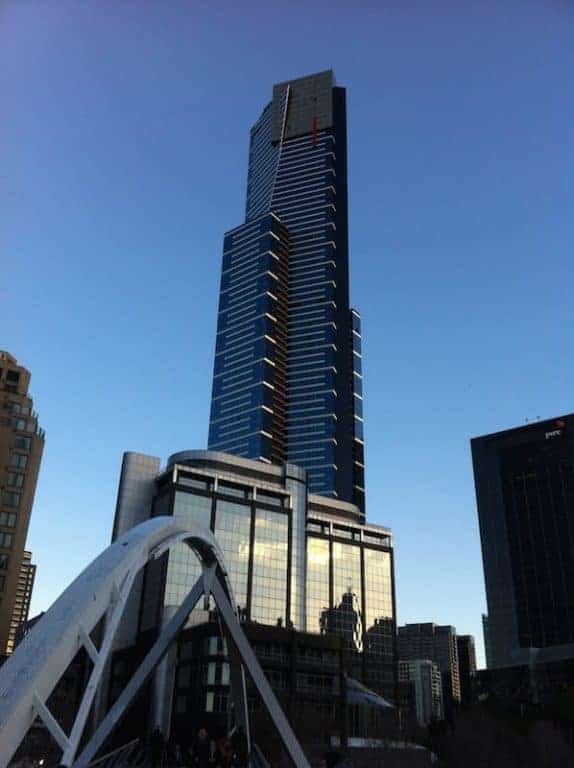 The Terrace – There is a small outside area called ‘The Terrace’ which is closed in high winds – surprise surprise, but if it’s not closed then you are rewarded with incredible views of Port Phillip Bay.

The Edge – The Edge is only for the brave! I’m seriously not brave enough to try this… why? Because it’s ridiculous! The Edge is actually a glass cube which hangs out over the edge of the tower 300 metres above the ground.

When you first enter, the glass is opaque as the cube moves out over the edge of the building. Once fully extended over the edge, the glass becomes clear. Do you think you’re brave enough to walk out on glass that high up? It’s actually fully wheelchair accessible too and if you are brave enough to do this then you just have to get your souvenir photo from the shop to prove it!

The Edge is not recommended for people with heart conditions… I wonder why?

Buying a Melbourne Attraction Pass is a popular way to get entry into Eureka Skydeck, The pass includes Melbourne Aquarium and Old Melbourne Gaol too!

One thought on “Eureka Skydeck”