As a photographer, I am normally not that interested in guided tours. I like to explore a new city myself and go where I want. Yet, there was one place I was extremely eager to visit in Chiang Mai… An elephant sanctuary, where elephants can live more naturally and aren’t kept purely to entertain tourists. I have to say it was one of the best experiences ever and I want to share it with you.

At first, I was a little skeptical, because I usually don’t like tourism that involves animals that are kept for tourism purposes.

In Chiang Mai, there two separate “branches” of elephant tourism.

The traditional form of tourism involves elephants that have to perform tricks for you in order to make money. There might be differences in how they treat their animals, but even those places that “only” let you ride the elephants and don’t force them to perform tricks, aren’t really animal-friendly. There’s plenty of information about how cruel elephant rides are which should discourage you from visiting. I would certainly not go to those places. It’s very obvious that the elephants aren’t really happy and only perform for you because they’re forced to.

If you’re interested in visiting more animal friendly places, ask if you’re allowed to ride elephants. If they’ll happily allow you to ride the elephants, then those are the places that you should avoid. There are far better alternatives that bring a lot more joy to the tourists as well as the elephants. In recent years, tourists have been more aware of the mistreatment of the elephants. Although elephants are part of Thailand’s culture, the purpose of these animals has changed. Decades ago, they were used as a workforce, to support farmers and move heavy machinery. Since vehicles have replaced the elephants, they needed to find a new purpose. They weren’t very welcome at farms anymore and got sold cheaply to touristic places, where they were viewed as simple goods.

Tourists visiting Chiang Mai have become more conscious about the treatment of animals and have started to avoid traditional elephant camps.

Parallel to the traditional elephant camps, more and more sanctuaries started to take in mistreated elephants to give them a new home. At first, those camps were private and were dependent on donations. Those camps are also run by volunteers who are solely interested to give the elephants a good life and not in profits.

Recently, they became more open to tourists, as an additional income source. You’re now able to visit elephant sanctuaries to observe the life of elephants in a more natural environment.

Now you might think that without being able to ride the elephants or seeing tricks, that those places might be boring. Personally it was a great experience to see elephants who enjoy the environment.

You can also look up ratings on TripAdvisor or visit their Facebook pages and read people’s first-hand experiences. They all exceed the expectations and I can only agree with them. I decided to visit the Elephant Jungle Paradise Park in Chiang Mai. It has a 4.9 rating (out of a max 5) on facebook with over 400 votes.

Now, obviously I can only speak for that particular elephant sanctuary, but from other sources, I heard that they are all very worth the money and a great experience. They’re usually very transparent in their work and have a social media presence. If you’re interested in visiting an elephant sanctuary, you should be safe to choose a different one after a little research.

Your day starts very early when the tour guide picks you up in the city of Chiang Mai. Throughout the city, visitors are picked up, which is very convenient. Before going to Chiang Mai, I lived in the jungle of Indonesia near the mountains, so I was already familiar with “interesting” roads, but the ride to the elephant camp was already an experience itself!

The elephant sanctuaries are usually located in the mountains a little outside the city. After a two hour ride you arrive at the entrance of the park. There you’re given traditional clothes, which are said to be easier to recognise for the elephants. You’re also told about the behaviour of the elephants and how to stay safe. Because of course the elephants are still wild animals and can be dangerous, even though they are generally very calm. 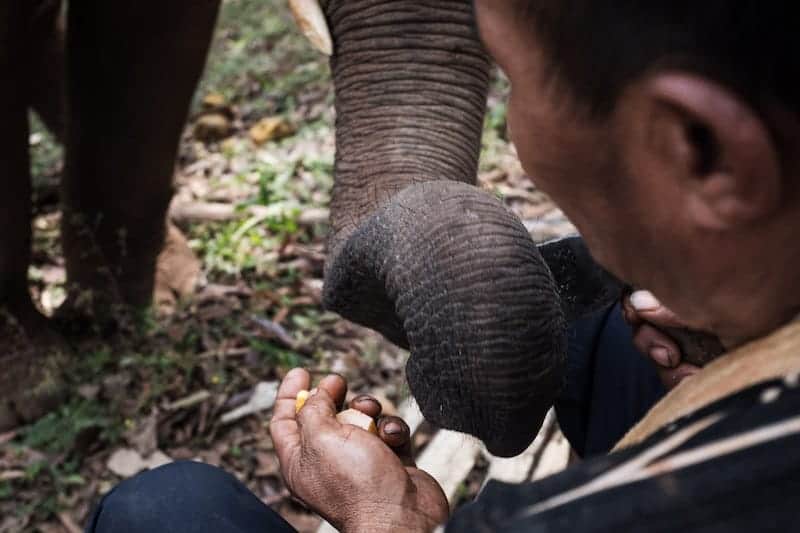 After the brief introduction, the elephants were already waiting for us behind a low fence. Every elephant has his own keeper who is responsible for it. They usually follow their keeper as he also provides their food.

It also has to be said, that some elephants might only visit with you for a short time and then leave to go back to the jungle. This is okay and they are free to do so. They aren’t kept against their will, just to show up for you and the other tourists.

When I was there, there were a few grown elephants and even a newborn. Of course, the newborn was a highlight and very playful. At the same time, you have to be very careful because newborns like to push everyone around. In a playful manner, yes, but the pure weight of it can be intimidating.

After a brief introduction and getting to know the elephants, they left the enclosure to get to their food. As part of the tour you’re able to feed them and the elephants were visibly enjoying the day. I guess that first meeting was about an hour long and then the elephants left to wander off in the jungle. At the park they also provide lunch for you, which is really enjoyable and consists of a few traditional dishes. After lunch, you prepare food for the elephants and get to meet them in a mudbath. The elephants use the mudbath to keep themselves clean and cool. The mudbath is probably the highlight of the tour for everyone, as the elephants are just fooling around.

Why you Should Visit an Elephant Sanctuary

If you want to see elephants up close, and know that they aren’t being exploited, then you absolutely should visit an elephant sanctuary. Elephant tourism that involves riding them is becoming unpopular for a very good reason. The elephants are treated very badly just for you to have that experience.

If you visit an elephant sanctuary you’re able to observe the elephants in a natural environment. And you can witness their relatively normal life and behaviour. I have to say, for $50 you get a really good day. Around half of your money goes directly into the care of the elephants, mainly food. The other half to the upkeep of the camp. So your money is more of a donation directly to the elephants and not for the profits of some tourism company.

You should also visit their Facebook page: https://www.facebook.com/elephantjungleparadisepark/ where they document every tour.

Author: I am Sebastian Jacobitz, a 29-Year-old Photographer from Berlin and passionate traveler. During my more than 3 months long travel through Southeast Asia I’m glad to have paid a visit to the elephant sanctuary and recommend it to everyone. You can also read more about my experiences on my blog: https://streetbounty.com/

Heading to Thailand? Stay at one of these hostels

Wondering what to do in Chiang Mai if you’re short on time? Check out Chiang Mai in 2 days.

One thought on “Elephant Sanctuary in Chiang Mai” What Makes an Elephant Sanctuary Ethical?